I often ponder what my behavior toward students and the feedback I give them looks and sounds like. I think I have an idea but many times after reviewing the type of feedback I have given students it turns out it was different than I thought. The third installment of my series on systematic observation addresses this issue using event recording, which focuses on teacher feedback, teacher prompting, teacher questioning skills, and other essential teaching skills. Event recording can also be used to focus on student behavior, which I will discuss in a later blog. For this specific blog I will just be discussing teacher feedback.

How to Use the Event Recording Spreadsheet

The event recording spreadsheet (Excel and Numbers) I’ve included with this post will help you to analyze different aspects of the feedback you give students while teaching. First, refer to the teacher feedback definitions listed above and select four that you would like to concentrate on. Next, have a colleague or administrator video record your lesson, making sure they follow you as you move around the gym. Also, make sure to wear a wireless microphone so you can hear all of the feedback you are giving students. After you finish your recording, simply download the spreadsheet and type the specific types of teacher feedback you desire to analyze in the cells labeled Behavior 1, 2, 3 and 4. As you watch your video, record each time you use one of the c 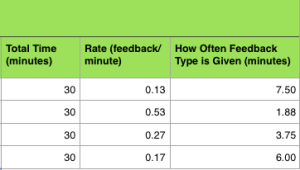 Note: 1) When analyzing variety of verbal feedback, choose four common words that you use while teaching as your four behaviors to see how much you use each verbalization. 2) Skill feedback should be divided by the total time spent in activity time.

The next installment on systematic observation on PHYSEDagogy will be focused on how to use event recording for teacher prompting, teacher question skills and other essential teaching skills.

Connect with me on Twitter if you have any questions: @collinbrooksie.