Today, in my physical education class, I attempted my first Breakout EDU and it was awesome! Breakout EDU is an immersive learning experience where students have to work together to solve puzzles to open a locked box. You can learn more by checking out the Breakout EDU website here. I first learned about Breakout EDU from a conversation I had with Justin Schleider on Voxer. I remember him telling me that Breakout EDU was something many educators around the country were trying out and I was very intrigued. The idea comes from the escape room game concept, which locks willing participants in a room and gives them a game scenario.  Then, they have to work together to escape the room within a predetermined period of  time. Here is a fun video of Conan O’Brien participating in an escape room.

When designing my Breakout EDU experience, I wanted to include a relatively well-known concept in PE, so I chose the 5 health–related fitness components. We had just finished up our FitnessGram assessment and I thought it would be a nice time to reinforce some of the concepts my students just learned. Then, I decided on a superhero theme to go along with the components of fitness and also incorporated physical activities that were associated with each clue. Here is the link to the complete PDF: Superhero Training Breakout PE 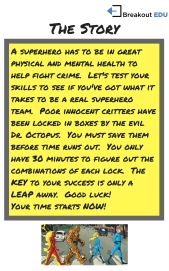 To plan my students’ experience, I started off with a story. My students love playing with critters so I thought I’d get them involved in the scenario. Dr. Octopus seemed like a suitable villain and cute little critters seemed to be the perfect characters to save. I wanted to include time for some set-up, reflection and clean up at the end, so a 30-minute task seemed about right. I developed clues to figure out the combination of each lock and considered how my students could use their physical and mental skills to help them solve the puzzles. I set up each box and now it was time to test it out.

The next step was to heterogeneously divide the teams and assign them their proper starting location and area. I have four Breakout EDU kits and my classes average about 24 students, so we had about 6 students to a group. I assigned a record keeper, tablet handler, mediator, and an encourager for each team. I told them that the experience might be a little frustrating, but I would be making my rounds to make sure everyone was on the right track. I told them the point of the game is to figure it out and that learning is not always linear.  I asked them to be creative with their thinking and honor outside-of-the-box ideas. I asked them to try, fail and repeat until they found success. I read the scenario and started the timer.

Inevitably, some groups insisted on no help, while others pleaded for clues. I told each group that a consensus would have to be reached before a clue, of which they had two, could be used.  The truth, however, was that I was constantly walking around giving unofficial clues. I wanted them to be challenged, but also successful. So, I watched and listened as each group read their first clue.

Each definition associated with each clue came from videos published by the Cooper Institute.  A playlist of the videos can be found here. Each definition also has an activity that goes along with it.

After the activity, my students had a chance to reflect on the experience using some reflection cards that are included in the Breakout EDU kit. They had conversations about what worked, what they could improve upon, and how their group worked together to solve each problem. Here is a video of my kids in action: https://youtu.be/hzIvvOvOX5A

ere lining up for our transition back inside, several of my students went out of their way to tell me how much they enjoyed the activity. Fortunately for us physical educators, Mark Foellmer has created this site with other breakout ideas for PE: www.cbhpe.org/breakout-edu.  Also, be sure to checkout the latest episode of the Global PhysEd Voxcast on PhysEd Breakout EDU.

The process was frustrating, messy, and full of setbacks. That being said, my students and I loved it. This, in many ways, is what learning should be.

← The #PhysEdSummit is Back!
Get Connected with EduMatch →